‘I want to make an impact. To entertain. To be creative. To make lasting statements. Like… Scorcese, or Woody Allen!
The Chicken Suit gives me time to myself, to think… and think I do, out here by the lights on Moggill Rd. Think about studying for my Obstetrics Exam, think about film-making, think about Sophie, think about what the hell I am doing in a Chicken Suit on Moggill Road?! Working part-time and saving for a video camera, that’s what. So I can have a more exciting life elsewhere.’
…But Phil’s life is exciting enough here, when you throw his best-mate Frank into the mix.

Dr Michael Tunbridge, UQ Medicine, Science and Law Graduate and Psychiatry Registrar at The Prince Charles Hospital, stars as Phil Harris, the 5th year medical student with thoughts too big for a chicken suit and ambitions too big for Brisbane. Of course he is opening the show… Mike wouldn’t have it any other way!

‘Phil once said I am a low-rent rockstar without a band, but what would he know? I don’t need a band. Frank Green is a solo artist. A one-off talent. A party-guy, a sex-machine and soon-to-be a brilliant surgeon… If I pass my surgery case-write-up…’

Tim Amos, fresh from wowing audiences at the Med Revue and patients in the Emergency Room at the Royal Brisbane, stars as Frank Green, Phil Harris’ Best Mate and Worst Nightmare, rolled into one macho package. If you have seen Tim onstage you will know not to miss this. If you haven’t, come see what you have been missing.

‘Work, Uni, Family, Boyfriend… Sometimes I feel like a chicken with it’s head cut off. Which is ironic, since I share that chicken suit with Phil. Why can’t my boyfriend Clinton be more like Phil? He’s interesting. And fun. Frank is fun too, but in a different kind of way… Never a dull moment working at Dad’s shop, except when Dad actually comes in to check on us. Bloody Dad, Did I tell you I think he’s having an affair?’ 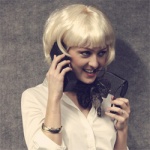 ‘Darlings! Darlings!… My that outfit has potential! I can tell you a few simple ways to dress that top up to suit a number of different occasions. We should do lunch… Speaking of which, I am late for a hair date with the girls. I wish my Sophie would do something about her hair. She takes after her father, Ron, that one. Ron and his big ideas. But that’s why I love him, He’s such a go-getter my Ron. Those youngsters at the World are good for him. Phil, he’s got a good head that one… And Frank, well, he’s got certain talents too…’

‘Phil is a good boy. We are so proud of him. Ever since he was little he wanted to become a doctor. Sometimes though he has his head in the clouds, all this movie-talk worries me. All that ambition. He is so talented, but we just don’t have that kind of money… and I wonder if all that time with Frank is good for him. Frank is a nice young chap, but he can be trouble, mother’s can tell these things. I just don’t want Phil to have his little heart broken…’

Dr Rina Savage, best known on the Medical Stage as co-convenor of the acclaimed 2010 Med Revue, stars as Phoebe Harris, mother-of-Phil and the one grown-up in World of Chickens behaving like a grown up. If you think her money-talk with Phil is awkward, wait for her Sex and Drugs talk!

‘My girls, They’re amazing. You should see my daughter Sophie, always hard at work at Uni or helping at her old-man’s shop. She’s studying media or something… She’ll have all the boys turning heads, she will, just like her mother, Zel. Oh Zel, she means the World to me. All my Worlds. Ron Todd’s World of Mowers and Ron Todd’s World of Chickens… Stop in sometime if you’re passing by Taringa. The boys will make you a great burger… and Hygienic. Did I say they’re practically doctors? Yeah, Frank and Phil. That Phil, he’s going places he is. I think he’s good for Sophie.’

Dr Tim Noone, stars as Ron Todd. As a earnest and loveable as Ron himself, Tim is a resident at the Mater Hospital where paging him on Ward Call is a pleasant experience. Tim fills the big shoes of Ron’s Todd’s World of Chicken’s namesake comfortably. The show is worth it for his toupee alone!